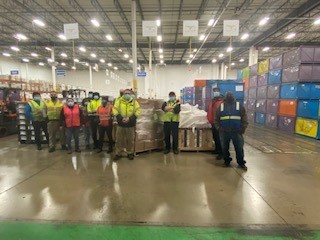 With a little collaboration and a lot of compassion, TAI Joliet and TLD Logistics, with help from LTL Carrier Dayton Freight, recently teamed up to deliver more than two tons of treats and candy to veterans and U.S. troops serving overseas. The sweets were collected during the annual Treats for Troops candy drive organized by Soldiers’ Angels, an organization that provides aid, comfort, and resources to the military, veterans, and their families.

For the last three years, the TAI warehouse in Joliet, Ill., in coordination with Soldiers’ Angels, has served as a drop off center for employees and anyone in the community to bring unwanted candy left over from Halloween to be donated to local VA hospitals and sent to U.S. soldiers overseas.  After collecting several hundred pounds of candy in 2019 and 2020, the Joliet team geared up last fall for another large donation of treats.

However, not long after the site started collecting donations in October 2021, they had surpassed the previous years’ donations combined. A donation from a local zoo brought in six pallets of candy, in fact, which was generously transported to the Joliet warehouse by Dayton Freight free of charge. In total, when the collection ended, the team was preparing to donate 10x more candy than in 2020 – 4,634 pounds to be exact – filling up eight 48″ x 48″ pallets, stacked as high as six feet.

The team quickly learned that that much candy is hard to move. Since the donation weighed about as much as a Toyota 4Runner, they had to figure out how to get it where it needed to go – San Antonio, Texas, an 18-hour drive from Joliet, Ill.

The team investigated possible solutions for transporting the candy donation but none panned out until Paula Sanchez, TAI warehouse specialist, made a call to TLD Logistics, a TAI transportation company based in Knoxville, Tenn. TLD stepped up to the plate and within a week’s time, the pallets of candy were loaded on a TLD truck bed and bound for San Antonio.

The Joliet team reserved some of the candy to donate locally to VA centers in Chicago and Maywood, Ill., but majority of the SUV-sized donation went to men and women overseas currently serving in the U.S. military.

It was a sweet reward for the Joliet, Dayton Freight and TLD teams that made it happen.

Toyota Tsusho America, Inc. is a multi-market, multi-business enterprise which has been operating in North America for over 60 years.

Find out how you can

become a part of our team